Survivor: Wadi Rum - Valley of the Moon is the seventh season of Bennett's Survivor series. It began on June 4th, 2016 and ended on June 21st, 2016. Dinosauro27 was titled the Sole Survivor, winning in a 6-1 vote against teamjacz. At the reunion, timtimeytim was given the "Player of the Season" award. The season lasted eighteen days, including the reunion.

Survivor: Wadi Rum - Valley of the Moon began with sixteen Tengaged users. They were divided into two tribes: Hubal, wearing green buffs, and Obodat, wearing brown buffs. These two tribes were named after deities of the Nabatean Religion.

Hidden Immunity Idols: At the beginning of the game, one hidden immunity idol was placed at each camp. Once per day, tribemates could guess an unselected number between 1-50 on their tribe's idol board. Under one number, the idol is hidden. The idol hidden at the Hubal tribe's camp was found by timtimeytim on Day 5. He played this idol on himself on Day 13, successfully negating three votes cast against him. The Obodat idol and the Oasis idol were both found by Zircon on Days 8 and 9 respectively. She played these idols on Days 11 and 17 respectively. She negated a total of four votes.

Mutiny: On Day 4 it was revealed that there would be a mutiny where players could swap tribes but only if they chose so. The only two players to swap tribes were TheKevmiester and Gamerden13 on the Obodat tribe switching to the Hubal tribe, all other players stayed on the same tribes. 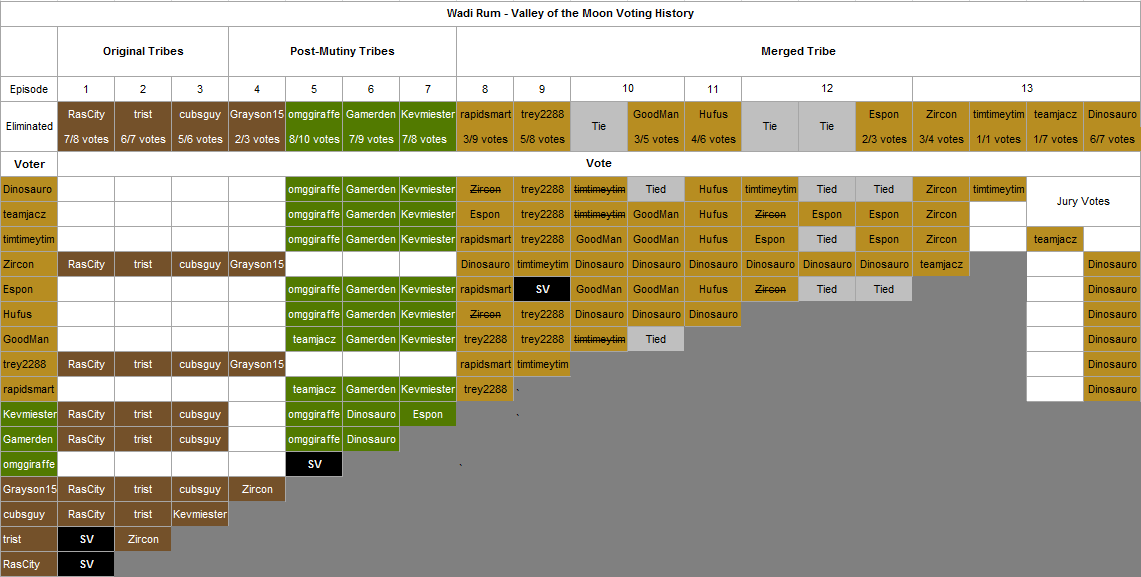