Survivor: Khao Sok is the sixth season of Bennett's Survivor series. It began on April 14th, 2016 and ended on May 1st, 2016. It was the first season in Bennett's Survivor series to feature returning players. Going into the merge, lionsden121 and Joshbb17 were able to spearhead a series of moves against their opposers, while cutting loose their allies along the way. In the end, lionsden121 was able to win in a 5-2 vote against Joshbb17 as a result of his strong jury management. At the reunion, Joshbb17 was given the "Player of the Season" award.

Survivor: Khao Sok began with eighteen Tengaged users. They were divided into two tribes: Golok, in blue, and Tarang, in orange. They were named after rivers in Thailand. Prior to the season starting, it was planned for there to be an initial schoolyard pick in which the two returning players would choose their tribes. However, this twist was scrapped when I decided it would be best to start the returnees on an equal playing field with the newbies.

On Day 5, a tribe swap occurred. On Day 9, Golok and Tarang merged into Malaya, in pink. The tribe name was coined by KCObedencio.

Amulets: After each immunity challenge, the person on the winning tribe with the best performance is given the power to determine which two castaways from their tribe will receive the next two amulets. At tribal council, amulets can be played only on the person who possesses them. One amulet can negate one vote. Amulets were given out after each challenge up until the final seven. Amulets were playable at every tribal council up to the final five.

Tribe Switch: On Day 8, the fourteen remaining castaways were randomly reshuffled into tribes of seven.

Double Tribal Council: At the final twelve, both Golok and Tarang went to separate, back-to-back tribal councils. At the prior immunity challenge, players competed against members of their own tribe for individual immunity. lionsden121 won for Tarang and Birew34 won for Golok. 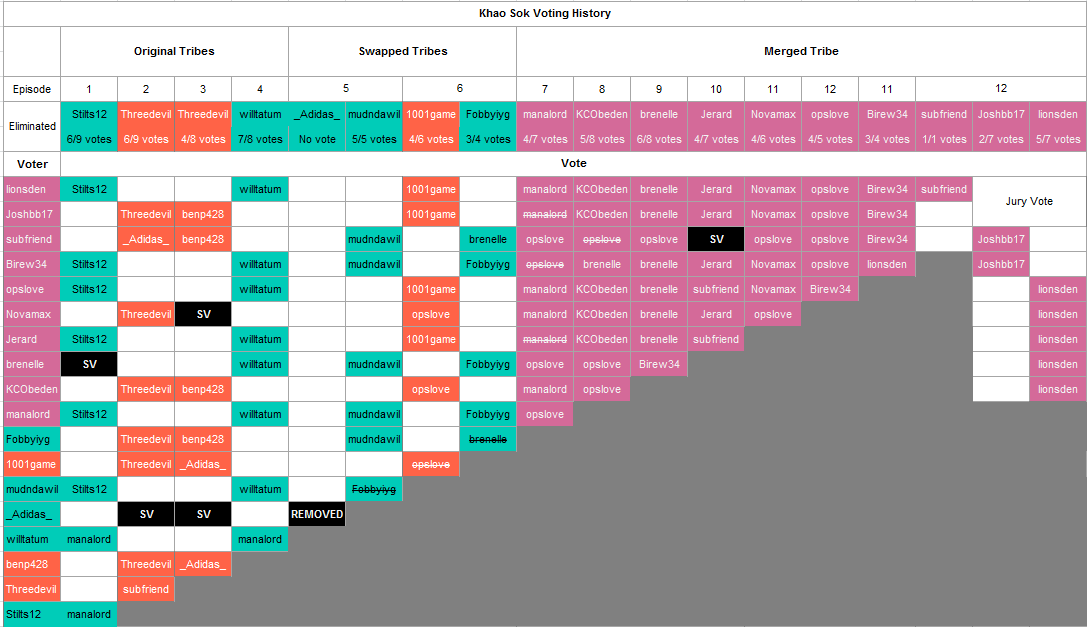